Internal Developer Platforms (IDPs) and GitOps tooling are often pitched against each other as competing solutions. The reality is often much more nuanced than that. Humanitec CTO Chris Stephenson and Codefresh Developer Advocate Kostis Kapelonis discussed pros and cons of each approach and show how both can be combined for optimal developer workflows. 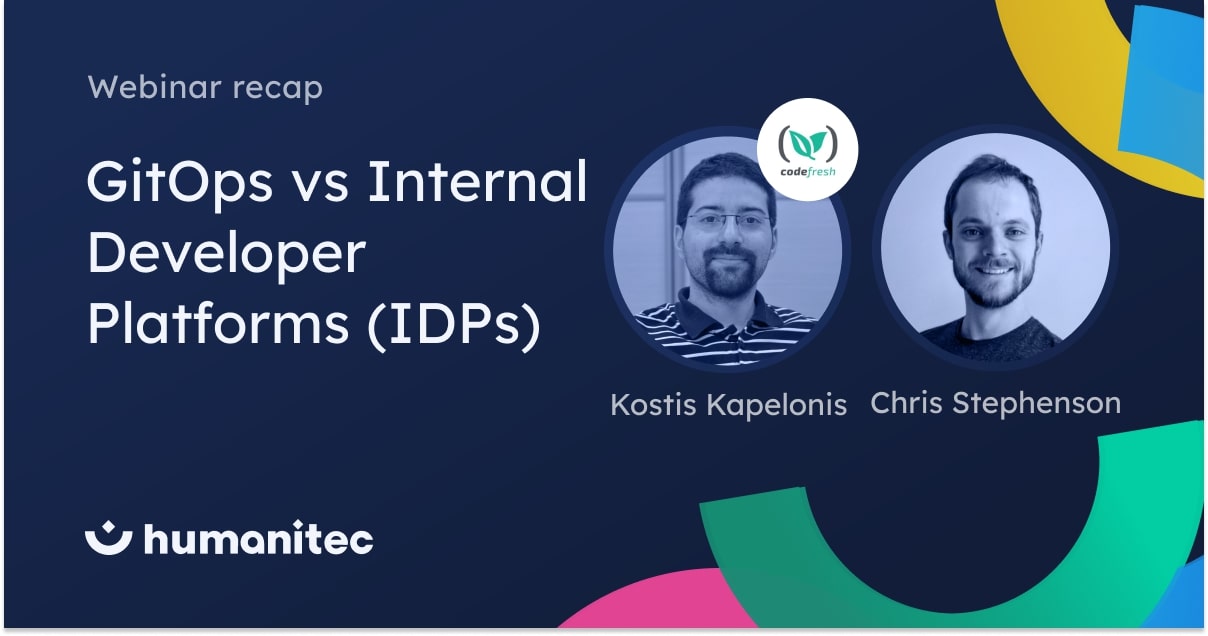 On the surface, GitOps and IDPs - or Internal Development Platforms - couldn’t be more different. Both these approaches are brilliant ways of adding more consistency and creating developer-first workflows, but it can sometimes be hard to picture exactly how these can be used as part of the same team setup.

After all, GitOps was developed to allow developers to utilize infrastructure as code (IaC) through Git, while IDPs aim to handle as much complexity as possible so developers don’t have to. So, you’ve got two DevOps powerhouses at different ends of the tooling spectrum. There’s no way they can work together...right?

In part one of our webinar series on GitOps and IDPs, Kostis Kapelonis, Developer Advocate at Codefresh, and Chris Stephenson, CTO of Humanitec, sat down to discuss how, and why, you should use these tools together to strengthen DevOps.

GitOps is a set of guiding principles that work together to create a developer-centric Continuous Deployment setup. By using Git to manage infrastructure provisioning, configurations and deployment automation, the GitOps approach aims to provide a single source of truth as code. Thereby developers can continuously deploy code changes and requisition infrastructure without these requests getting stuck in a ticket queue in the operations team.

While Kostis admits that GitOps isn’t always applicable for every situation - which he covered in more detail during the Q&A - he explained there are significant benefits to using GitOps principles, such as:

With that being said, GitOps isn’t appropriate for every setup. Sure, it works well for simple setups, but when developers start working with multi-environment configurations, GitOps can make this unnecessarily complicated. Similarly, GitOps often struggles in complex enterprise setups where confidential information like database passwords need to be managed outside of a business CD setup. That’s not to say that GitOps can’t be adapted to work in these situations, but rather that there are other approaches that may be more suited to large enterprises.

What is an IDP?

Can GitOps and IDPs work together?

In short - it depends.

Chris and Kostis both believe that GitOps and IDPs work well together, and can make most DevOps setup more efficient when these concepts are used in tandem. However, like most DevOps principles and tools, there are situations where devs or ops may not want to utilize them.

Kostis pointed out that GitOps might not work in all situations:

Similarly, Chris mentions that IDPs might get in the way in some situations:

“Having an IDP...gives you a semantic understanding of differences between environments, so you don’t need to be an expert...On the other hand, if you have a very subtle bug from a small change that’s been deployed, it doesn’t make much sense to use an IDP to debug that because you’ll need to go to the low-level files”.

With all of that being said, however, using GitOps and an IDP like Humanitec together offers a ton of benefits for most DevOps environments. Plus, implementing the two together is as easy as using an IDP as a layer over GitOps protocols.

Both Chris and Kostis agree that the biggest benefit that IDPs and GitOps offer is that using the two together gives DevOps professionals a ton of flexibility.

“ [Developers] can work on the level they choose. So, if I’m a dev that wants to look [at files] on a deeper level, I can, but if I want to just focus on code, I can do that too. It gives you a lot more options as a developer. Meanwhile, in ops, I might not care about the application, so I can choose to just work in GitOps and not touch the IDP.”

This can save a ton of time, particularly in instances where developers would ordinarily have to fish through YAML files to find resources. It leaves developers with the option to work on a more granular level if they want to gain a deeper understanding of how everything works together, but it also facilitates a greater focus on the project at hand.

However, the biggest benefit that Chris and Kostis agreed on was the level of consistency both GitOps and IDPs provide.

Chris explains this in terms of using guardrails in DevOps, or having operations define specific pathways that developers can use to generate infrastructure resources. This gives developers space to move outside of those pathways if needs be, but generally maintains a level of consistency that reduces the risk of bad deployments.

When devs can generate a new environment on the fly, it makes it easy for them to get on with work without worrying about making sure all of these new environments, databases, or other infrastructure elements are being run consistently. So, IDPs can fully manage the provision of these resources, while GitOps works behind the scenes to ensure that these elements are generated in a consistent and validated manner.

When it comes down to it, GitOps and IDPs are both valuable assets in DevOps. So, while it’s easy to compare how both of these concepts handle different aspects of DevOps, both Chris and Kostis agree that these elements work better in tandem than as separate entities.

In the next webinar in this series, Chris and Kostis demonstrate how GitOps and IDPs can be used together using Humanitec and Argo CD. You can find the webinar recording here or, if you’re short on time, read the blog post to see how these two assets can strengthen your DevOps setup.