Most engineering teams, especially in the enterprise, often struggle in their migration to cloud native setups. In this article we walk through this very common (and sad) journey, based on the 100s of enterprise setups and migrations we witnessed in the last years. 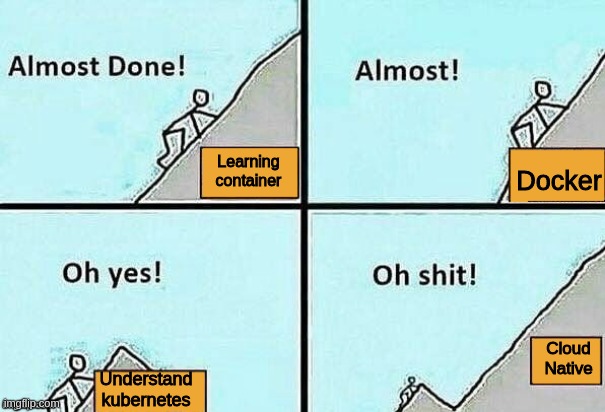 Just because I’ve seen this transition happen so often, I thought I’d jot down for you what it normally looks like. If you’re working in a large enterprise, this is a pattern that can cost you lots of energy at best and your job at worst.

Let’s imagine a scenario: You are on prem with OpenShift now. Operations are heavily centralized against a dedicated team. You’re moving to the cloud. New AWS account. Everybody gets access to everything. Freedom is the new structure, you think it’s a great idea to weaken operations and move this “closer to the teams”. The teams start off by building great stuff. You proclaim happiness. Senior devs are ecstatically happy. CTO approved.

Here is what your next 48 months will look like:

Sounds grim, right? It doesn’t have to be. Join my webinar on the 1st of June where I’ll present a step by step guide to platforming your delivery setup which will help you to prevent falling into the trapps I just brought up.