How a QA engineer works with an Internal Developer Platform

In this article we will explore how QA engineers benefit from working with an Internal Developer Platform (IDP) on a daily basis. 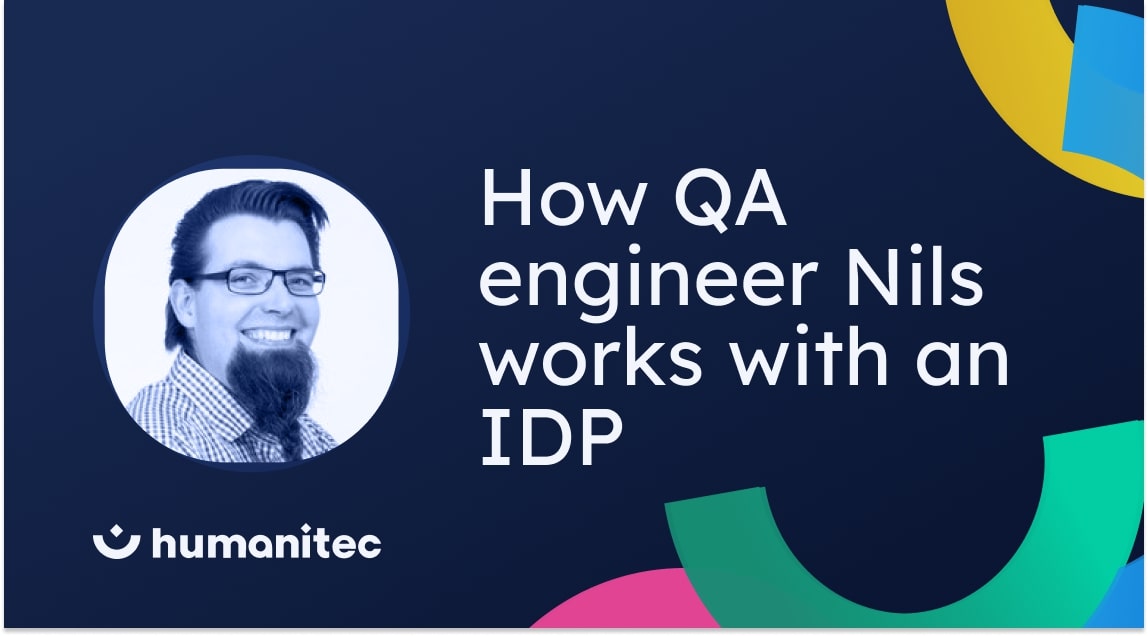 Internal Developer Platforms like Humanitec are a way to enable self-service for any developer. How does it affect QA engineers? Let’s actually zoom in and have a look at how QA developers would use such a platform on a daily basis.

We’re sitting on a pretty unique set of data by now. Our surveys regularly reach thousands of users, our customer success teams look at literally hundreds of setups in detail every year. That gives us good insight into how QAs across different org sizes work.  We’re sprinkling in video interviews with QA veteran Nils, who has been using Humanitec for a while now. We consider his approach as fairly representative of what we are observing in the market.

Modern QA teams are often leveraging a variety of different internal tooling to ensure any code that reaches production is bulletproof. The type of tooling can vary, depending on the size of the organization and the requirements around security. Beside being responsible for quality assurance, QAs need to manage and deploy a whole fleet of internal applications, deal with pipelines and deployment infrastructure. This is time they sacrifice, instead of writing test suites.

But essential for any QA team is also keeping an overview, understanding what has been deployed where. Which microservice is running in which version in which environment? Are our test results impacted by the relative version drift or by the underlying infrastructure? Traditional setups using GitOps or scripted pipelines make it hard to impossible to derive these insights fast. Conversation with the team that pinpoints the state of unstructured scripts stays blurry.

How QAs use IDPs and Humanitec in particular

QAs work with Internal Developer Platforms in two ways: to deploy and operate internal tooling and to utilize the unified Platform API to build apps that help make informed decisions and tests.

The operating part is the standard use-case for Humanitec, that’s the daily bread and butter use-case for frontend developers or backend engineers working with the platform. You connect your CI to the Platform API, match the infrastructure per environment and you have a fully fledged system that will help you with all operational aspects. From a simple image update to consistent config creation, roll-backs, ephemeral environments and more are now easily enabled. Everything that is about keeping things tidy, maintenance and operational overhead is kept to a minimum and interdependencies between teams low.

Humanitec is particularly powerful for QA teams to develop views and custom applications on top of the unified Platform API. You now have this central API you can pull insights, states and errors from. Nils for instance has built views that show the state and version of each microservice across all the environments and applications that they have to test. Giving them an easy indication of necessary updates, delays or focus areas.

Another app allows them to apply diffs between states of environments. Humanitec creates context specific configurations based on baseline YAML files. This lets you run diffs across different deployments and understand programmatically what exact changes were introduced that may cause problems.

Nils is a big fan of the Platform API. He works closely with postman to utilize their workspace tools to leverage the Humanitec API, as well as with third party teams such as Logilica, which build performance metrics on top of the API.

Nils’ answer is clear: “I don’t see any restrictions for myself.” As QA engineers still have access to all their tools and to the infrastructure itself, the IDP just puts an additional layer on top of the tech they already use. But as Nils points out, an IDP enables him “to have easier access and a more focused view” on things he has to observe. The usage of an IDP reduces context switching and cognitive load for QA engineers as much as the rest of the team.
Check also how Nils' colleagues in frontend and backend are utilizing Humanitec to operate their apps in self-service.