Internal platforms for the enterprise

In a recent webinar, we talked to Courtney Kissler about building internal platforms at the enterprise level and why it’s essential to consider platforms as products. 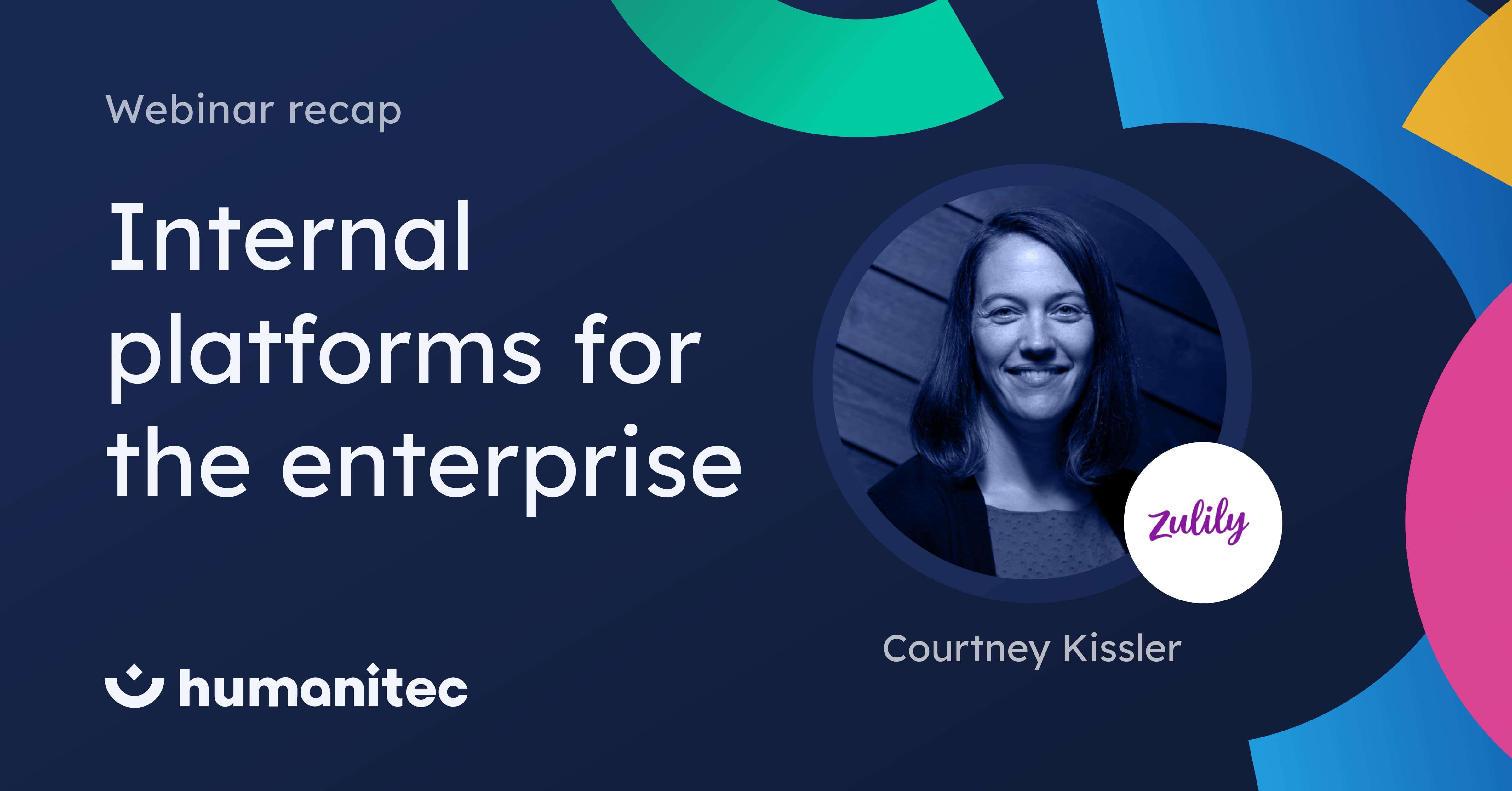 On October 26, 2021, we sat down with Courtney Kissler, CTO at Zulily, to discuss technological transformation at the enterprise level.

Courtney has helmed multiple large-scale tech revitalizations for companies including Starbucks, Nike, and Zulily. The webinar covers everything from why evolution is necessary at the leadership level, to the emergence of anti-patterns, to the transition to product and platform-driven DevOps.

From Nordstrom to Nike: how to build internal platforms for the enterprise

In a discussion moderated by Christoph Richter, Humanitec’s COO, Courtney talked about her professional experience. Courtney started in the start-up realm, then moved to Nordstrom for 14 years in various roles in Ops and Dev. After Nordstrom, she hopped over to Starbucks as the VP of Retail Technology, then Nike as the VP of Digital Platform Engineering and later the VP of Global Technology.

Now, as the CTO of Zulily, she’s focusing on personal relationships and people as the most important asset to businesses.

Since Courtney has held her fair share of positions, she notes that common patterns and anti-patterns emerge although each organization is different.

Courtney dives right in and references Puppet’s 2021 State of DevOps Report to remind us that treating our platforms as a product is essential. She says that it does require a mindset change but that it’s a crucial change for leaders to make.

She goes on to say that a generative (performance-oriented) culture is a significant component to platform success. “Not only is your platform approach important, but how teams interact is critical. How does information flow? How do teams work together? … If there’s no focus on team interaction and how information flows throughout your organization, you’ll only gain limited success,” she states.

When it comes to platforms, she stresses the need for companies to optimize for speed rather than cost. “If you’re doing speed right, you’re not compromising stability and quality,” she reminds us. “I think sometimes when organizations start to focus on a platform approach, they focus on consolidation. Cost savings. ‘How do we make this an efficient platform?’ Versus ‘how do I ground it in delivering value, high-quality, speed, and optimizing for the developer experience?’”

Courtney tells a few stories about her time at Nordstrom and Nike, and she gives listeners a vital piece of advice: “Just because you build a platform, doesn’t mean people are going to consume it. It has to solve a need; it has to be compelling, and… you need to treat it like a product. If you deliver a product to a customer, you don’t let it go stale. You’re constantly improving and iterating on it. Same thing with platforms.”

This serves as an excellent reminder to focus on crafting platforms that meet developers’ needs. In talking about one of her experiences with Nike, Courtney said that her team could solve so many problems by simply asking themselves if they would recommend their product to a friend. Connecting to the customer helped them close feature gaps, improve their internal communication platform, and work more efficiently.

But the thing is—we’re never done. Courtney says there’s always room for improvement and growth, and it’s our job to keep innovating.

She also shares her belief that a platform team’s role is to design for joy. Courtney asks us, “What are you doing to minimize burden for your customers?” She encourages us to include the processes in the overall experience and consider how easy it is for consumers to access and use the platform. This idea brings us back to her point about speed—a frictionless platform makes for a better platform.

And in Courtney’s opinion, the best way to solve problems is to make the problems visible. She shares a blog article titled “Viscosity vs Velocity” by Ryan Bergman to demonstrate this point.

Courtney notes that team leaders have to set the parameters for success and that some discipline enables speed, agility, creativity, and innovation. As a team leader, the best thing you can give your team is “high curbs and wide boulevards” to work in.

She states that one of the key things she’s learned in her career is that it’s essential not to get hung up on trying to define what a platform is. Instead, developers should start small, learn before scaling, and focus on the developer experience rather than trying to pigeonhole what a platform should or shouldn’t be.

Courtney shares numerous books and websites she recommends for inspiration and resources. You can see her complete reading list here.

Courtney stated that in many companies there is a disconnect between the executives and the boots-on-the-ground team, and that it’s essential for leaders to be a part of the hands-on process. And they need to be there not to micromanage, but to genuinely be there to unblock congestion.

“Leaders need to go-and-see, not go-and-tell,” she states. Senior leaders must be engaged—not just in words, but in action. If the leaders say it’s time to change something but aren’t there to facilitate the change, they’re not truly demonstrating support for problem-solving.

When it comes to shifting from a command-and-control workplace culture, Courtney reiterates the need to set up a system of accountability. The way for change to be successful is for the entire team to shift away from being output-focused to being outcome-focused. Leaders must set clear outcomes for the teams and create the right environment where there’s shared outcomes, then teams can work together to make something happen.

Courtney reported that in a lot of cases, there are certain controls that need to exist inside self-service platforms. She claimed that it’s essential for teams to build in things like observability patterns or things that can minimize barriers or friction later. Courtney reminds us that teams almost have to go slow to go fast and make sure they’re doing enough barrier reduction out of the gate.

She also states that it doesn’t help teams to wait until they have everything perfect before they allow anyone to consume the platform. Instead, it’s helpful to designate a team (or two) to figure out the platform’s needs, build in as much as they can to make it a relevant experience, then iterate and learn as they go.

Courtney says teams can start as small as they want because small steps lead to big change.

In a nutshell, our webinar with Courtney reminded listeners: